During his time on earth, Jesus boldly spoke out against inequality, helped the oppressed, condemned the oppressor, and embraced the alienated. Jesus didn’t just verbally affirm the causes of the oppressed. He wasn’t a bystander, cheerleader, or passive observer. He devoted his entire life towards actively seeking positive change. He acknowledged and actively addressed what he observed: inequality, systemic injustice, and an apathetic society.  He passionately involved himself with the exploited, ignored, mistreated, enslaved, abused, objectified, and despised.  He ate dinner with them. He listened to them. He befriended them. He defended them. He healed them. He encouraged them. He loved them. Social justice was a central part of his message. It wasn’t a minor add-on to the gospel; it was a vital part of the gospel, and it still is today.

Please join us Thursday, March 10, 2022 from 4:00pm-5:15pm in the church as we take a look at the themes of Catholic social justice with Father Jon Pedigo. We will reflect on our own personal response to the social justice themes and the importance of each in our own lives. Father Jon Pedigo has been awarded the 2008 Immigrant Advocate of the Year by SIREN (Services, Immigrants, Rights and Education Network), the 2010 Director’s Award from the Human Relations Commission of Santa Clara County, the 2013 Cesar Chavez Social Justice Award from American Muslim Voice and the 2014 Cesar E. Chavez Si Se Puede Award by the Chavez Family Vision Foundation.  He is currently the director for advocacy and community engagement for Catholic Charities of Santa Clara County. 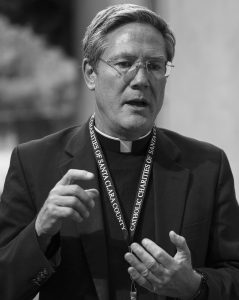